3 on 3 Basketball – Is it the Ultimate Basketball Teaching Tool for Youth?

You are here:
Athletic Development 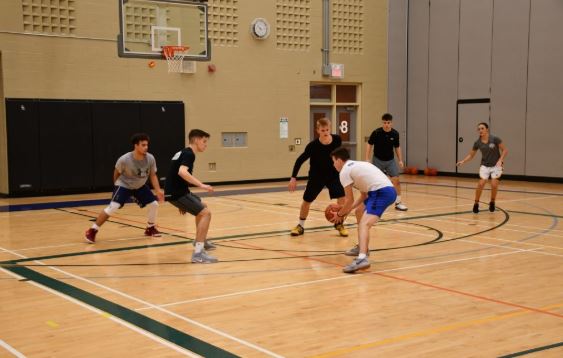 As with starting anything, starting to play basketball means a there’s a learning curve. From rules to basic skills, techniques to game plays, it can all feel like information overload, especially for children playing on a court with 9 other kids!

A 3 on 3 Basketball Movement

Lately there’s been an increased movement towards playing with 3 players on the court per team, utilizing half the court and only 1 basket (referred to as 3 on 3, or 3 vs. 3….or 3v3). This is great news for kids just learning how to play basketball. 3v3 helps give kids opportunity to play the game with much less structure than a typical 5v5 game while learning specific skills in fun and engaging ways.

3v3 is even emerging as a professional FIBA event, complete with world rankings and a world cup, and it was just included in the 2020 Tokyo Olympics! So, while 3v3 is a great tool for teaching kids basketball, the game potential doesn’t end there!

Join IBSA Basketball this fall for our next 10 week session to see what all the fuss is about! Our professional coaches will help your child learn and play in a structured environment that will help grow their skills and game knowledge. You never know, they may get to the world cup of 3 vs. 3 basketball or Olympics one day!

Read on to learn a few of the benefits of using this method as a training tool and to find out where your kids can get their fix!

Benefits of 3v3 as a teaching tool

Simplifies the game, making it easier to learn

3v3 helps to simplify the game because there are less kids being taught and less kids putting their learning into play on the court. When the game gets underway finding the open man or an opening to drive to the basket is much easier with less bodies on the court. 3v3 also removes the need for specific positions, giving kids less technical stuff to learn while they’re still mastering basic skills and game knowledge.

In 3v3 basketball games there are no real positions so every player has to react to what’s going on in the game. This helps kids develop skills like defence, offense, spacing and how to move with the ball without relying solely on drills to teach them. After all, the game really is the best teacher!

In 3v3 there is more opportunity for each player to get the ball in their hands. This naturally means more opportunity to learn how to make the quick decisions needed in bigger 5v5 games. Having more time with the ball means the player will improve much more than if they were playing 5v5 and hardly getting to touch the ball.

Gets all players involved

In a standard 5v5 game it’s easy to rely on stronger players to do the parts that some players might not be as good at. But in 3v3 there is no one to hide behind so all players get the opportunity to grow their game equally.

Breaks the game down into smaller, more easily teachable chunks

Breaking the game down into smaller, bite sized pieces makes it easier to teach kids different plays, moves and techniques. Introducing the pick & roll, screening away and how to back cut or v-cut to players in a 5v5 game just creates confusion because there’s too many other players on the court. You want the player to focus on how to run the play, not what everyone else around them is doing.

When there’s less players on the court looking to get the ball, there is more opportunity for the kids playing to score. Scoring and winning isn’t everything, but it sure is fun!

And isn’t that really what youth sports is all about?

Time to hit the court!

Starting kids with 5v5 can mean some kids get left out and don’t touch ball enough since that style of game favours the stronger kids. However, when teaching kids the love of the game, it’s important for all of them to get engaged.

Basketball and Progression of Training: It’s a Marathon, not a Sprint!
November 12, 2018